For decades the brutality and extremes of Wisconsin’s wildlife “management” practices managed to stay mostly hidden from or ignored by the public at large. That all changed in 2012 following the passage of the Wisconsin Bear Hunters Association
penned bill that allowed everything short of artillery to be used against the state’s fragile wolf population. The blatant disdain for the wolf population was exhibited in the very day wolves were removed from the federal endangered species list. On that day in 2012 disgraced former Representative and ALEC puppet, Scott Suder, introduced the wolf killing bill into the Wisconsin legislature. The bill included some of the most reckless and brutal extremes ever seen in modern wildlife “management.” Night hunting, road hunting, unlimited private property killing, electronic calls, bait, traps, and most horrific of all dogs were written into the initial draft of this bill. Suder pretended to be the “author” of this bill even though the WBHA essentially admitted that they and seven lawyers had written the bill. In fact the “author” turned Koch lobbyist, Suder, seemed shocked that his bill included road hunting and unlimited private property killing of wolves. He struck those provisions from the bill but the rest of the abhorrent and reckless provisions remained. With public input ignored the bill sailed through the Wisconsin legislature and was signed into law by the anti-wildlife governor, Scott Walker. This bill has now led to hundreds of wolves killed and a massive drop in population numbers. Despite this massive drop in population and strong public support in Wisconsin for maintaining the wolf population at current levels, Wisconsin pushes on with massive kill quotas and the horrific use of dogs against wolves. The disdain for the gray wolf population among the Wisconsin DNR and federal officials is so evident that both agencies blew off a letter written to them by five preeminent scientists and experts regarding serious concerns with Wisconsin’s reckless “management” plan and shoddy accounting of the population numbers.

Despite this an obviously worried DNR has been attempting to implement new methods of tracking wolf populations and trying to cover up for their reckless allowing of dogs to be used against wolves in the state. The DNR is so hell bent on covering up the inevitable results of brutal fights between wolves and dogs that they are going out of their way to allow hounders that killed wolves with dogs to submit their kills for “inspection” before they are skinned. Of course this program is “voluntary” and no hounders are expected to participate.

The Department of Natural Resources plans to ask wolf hunters to allow federal wildlife specialists to watch them skin their kills this fall and document signs of bite trauma.

DNR officials have acknowledged few hunters will likely participate. But Bear Hunters’ Association President Al Lobner said Friday his group supports the plan. He it offers a chance to disprove the notion that hunters allow their dogs to fight wolves.

Last year hounders were given up to 35 days to turn over their dog killed wolf bodies thus allowing a month of decomposition to cover up all evidence of dog bites on the wolf bodies. Now this year the DNR wants to pretend that they are doing everything that they can to “prove” that dogs and wolves are not really fighting. This despite another year of hounders having 22 dogs killed by wolves while allegedly “training” their dogs to be used against bear. Each one of these dogs results in a $2500 payout for the reckless hounders. What is also evident in these “depredations” are the advanced age of some of these dogs and chatter on hounder websites about “disposable” dogs. In fact common terms for these dogs are “shiteaters” and “culls.” The hounders brag about how these “shiteaters” and “culls” are “disposable” dogs that they don’t keep. Now why would this be? Bait dogs? More like bait for a nice fat $2500 check from the Wisconsin DNR. Then when one of these “shiteaters” or “culls” magically get killed by a wolf they suddenly become “family” that hounders whine and cry are worth in excess of $10,000.

But hounders are not the only scofflaws that the DNR goes out of their way to protect. Trappers are another group of sadists that can kill anything and everything without repercussions. Wolf hate also runs strong among the group that represents trappers in Wisconsin, the Wisconsin Trappers Association. Not only is the WTA very anti-wolf, they also sit on the anti-wolf group stacked Wolf Advisory Committee.

The Wis. Trappers Association is very science oriented (HA!!!) and has worked to develop Best Management Practices. The ecosystem is not managed by wolves and wolves do not have ecological value in the northwoods; man supplies the balance. The 350 or less goal must be maintained; cannot be 351.

This group has a long and cozy relationship with the Wisconsin DNR. In fact the WTA is responsible for teaching DNR sanctioned “trapper education” courses. The most disturbing aspect of this cozy relationship between the DNR and WTA is the promotion of a DNR program that provides cover for trappers that “accidentally” catch and kill “non-target” species.

Please Contact the DNR About Incidental Take!
The scientific use of these carcasses and sale of salvaged pelts improves our understanding of these species and improves our trapper education program.

What the 2014 version removes from the above wording is that the sale of these “accidentally” funds WTA “trapper education” courses. How randomly seeding an area with these brutal and sadistic torture devices can lead to anything “accidental” is beyond me. How does this do anything but encourage poaching and indeed targeting “non-target” species? This is just another example of how the Wisconsin DNR provides cover for unethical, brutal, and what should be illegal behavior. Want an example of this? Last year this was posted on one of the viciously anti-wolf Facebook pages during last years wolf slaughter.

“Over 100 lb. Killed on the farm I hunt by portage. Got caught in trap last sat. Ripped 2 2 foot stakes out of ground. 1 week later farmer was combining corn called him up said hes in the corn with the trap. 3 hours later bang” 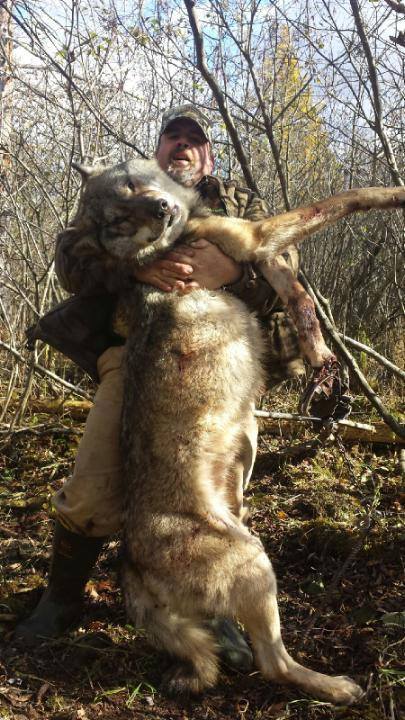 What happened to this sadistic and illegal trapper? Absolutely nothing. This incident was reported to Wisconsin DNR Law Enforcement and no action was taken other than “educating” the trapper and his farmer buddy. This poor wolf drug around a trap for a WEEK before being executed and NOTHING was done to the trapper or property owner that participated in this. They will send a SWAT style raid against a baby fawn but wouldn’t press charges here?

Now the DNR wants to even legitimize this behavior. Last week the DNR announced another “voluntary” program that “asks” trappers to call them when they “accidentally” trap a wolf so that they can collar it for “research.” Not only has the wolf been likely injured in the brutal torture device known as a trap where they may have spent hours or days, now they have to go through the stress of being “collared.” Considering that certain wolf haters specifically target collared wolves and some even collude to wipe out entire packs this is very concerning for wildlife advocates.

The question that we keep asking is why is the DNR providing all of this cover to hounders and trappers? Why not make these programs mandatory? If hounders have nothing to hide why not require them to immediately present the killed wolf for inspection? Why use what are essentially poached wildlife to fund a PRIVATE organization’s “trapper education” program? Then encouraging trappers to report “accidentally” caught wolves for collaring? Come on. There is nothing “accidental” about trapping. Just as there is nothing accidental about stepping on a landmine in a deliberately placed minefield.

The Wisconsin DNR is trying to play cute and pretend that they are doing everything that they can to show that hounders and trappers are not engaging in “unethical” practices. The problem is that these programs only provide cover and encourage these sadists to do even more brutal acts knowing that there are zero repercussions and that they will even help to fund their trapper organization.

I guess Wisconsin should now claim the moniker of “The Volunteer State” from Tennessee because all you have to do is volunteer the fruits of your illegal and unethical behavior and you have instant cover. Welcome to Wisconsin.