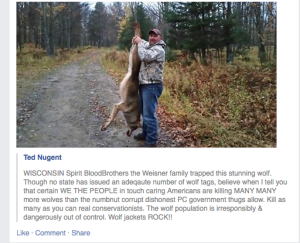 I will let the words of this washed up draft dodging musician turned racist rightwing blowhard and convicted poacher speak for themselves:

WISCONSIN Spirit BloodBrothers the Weisner family trapped this stunning wolf. Though no state has issued an adeqaute number of wolf tags, believe when I tell you that certain WE THE PEOPLE in touch caring Americans are killing MANY MANY more wolves than the numbnut corrupt dishonest PC government thugs allow. Kill as many as you can real conservationists. The wolf population is irresponsibly & dangerously out of control. Wolf jackets ROCK!!

I guess threatening the president and being a convicted poacher are not enough for this pant crapping blowhard. He still apparently does not understand that poaching is against the law. Your 15 minutes of fame ended about 40 years ago, Ted. We are still ready to take you up on your offer, or did you crap your pants again in anticipation of that?