For decades the State of Wisconsin has been waging a war on our native wildlife and using hounds as four legged weapons. Even though the use of hounds against wildlife, particularly bears, has only been legal for a few decades it somehow has been warped into being considered “heritage” and “tradition” by the Wisconsin DNR and stake killing groups. For a signifiant portion of each year our public lands, particularly our federally owned national forests, are over run with a violent subset of the “hunting” community and thousands of bloodthirsty hounds. This same violent subset of the “hunting” community is also responsible for dumping at least 4.6 MILLION GALLONS of stale junk food, used cooking grease/oil, and toxic blocks of chocolate as “bait” for six months of each year beginning in April and used to condition bear and other wildlife to human food sources. In fact a recent study showed that an average bear receives 40 percent of their yearly food sources from this “bait.” Despite this the Wisconsin DNR refuses to make any changes to the duration of the baiting “season” or what type of bait is allowed.

“The agency is not likely to recommend changes to bear hunting tactics. It’s also not known at this point how much appetite the public has for change.”

I would say that if “the public” had any idea about what is allowed to really allowed you can bet that there is quite the “appetite” for change.

That isn’t even the most concerning thing that we discovered recently. This is posted in the Wisconsin DNR’s 2017 Bear Hunting Regulations: 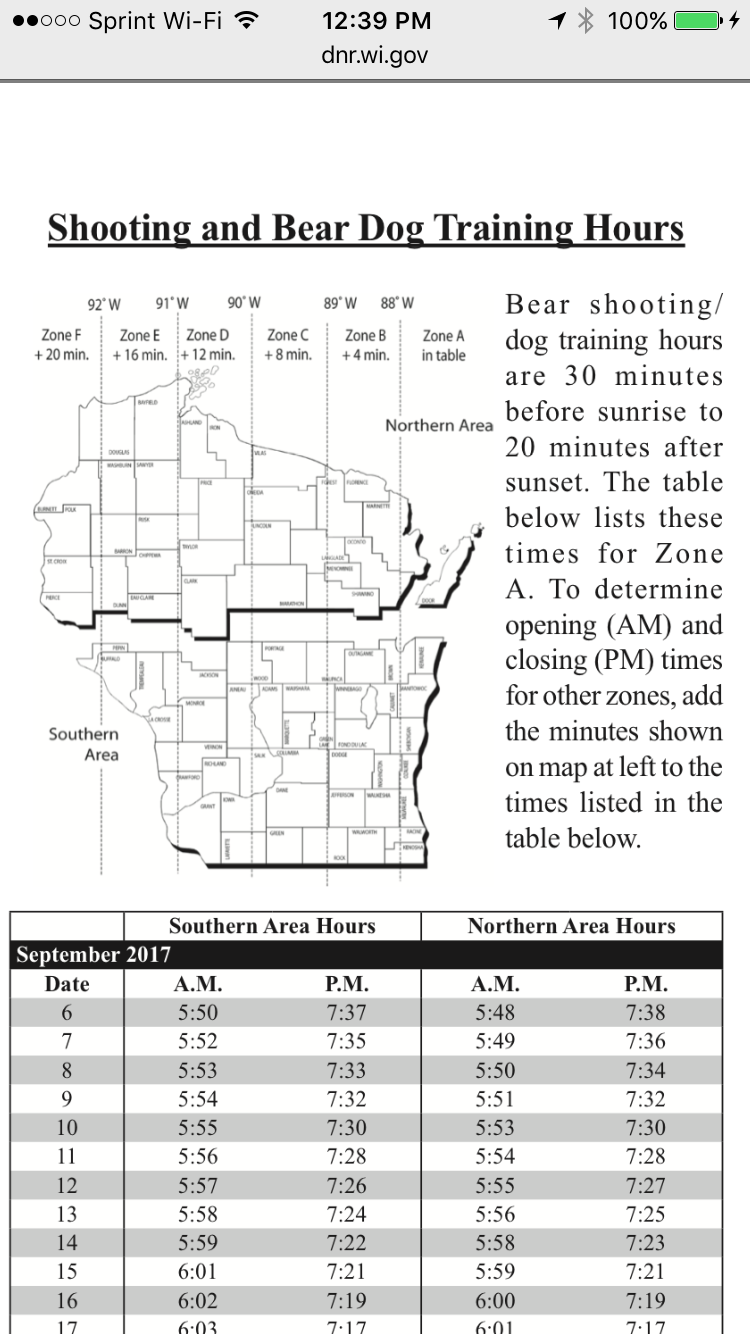 “Bear shooting/ dog training hours are 30 minutes before sunrise to 20 minutes after sunset.” 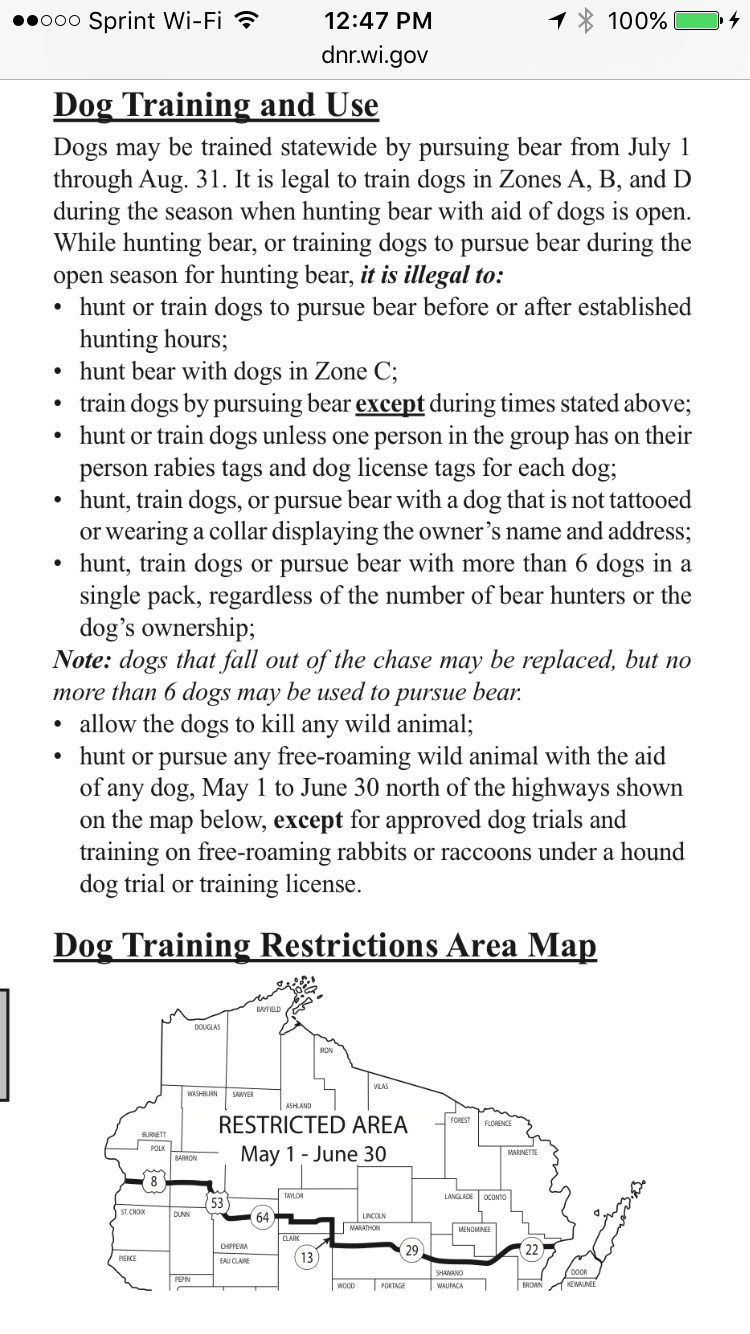 In other words the abomination known as “hound training” season is a legal free for all where hounders can let their dogs chase, fight, harass, and otherwise rampage though our woods for over two months with ZERO permit requirement or ZERO restrictions other than they allegedly cannot allow their hounds to kill a wild animal “without DNR permission.” You read that right. Animal/dog fighting is perfectly legal in Wisconsin and it is all written into law or there are no laws in place forbidding it. The state considers all of this to be “heritage” and “conservation.”

We have a real problem here in Wisconsin. Despite all of the blather from bought and paid for elected officials and paid “hunting” group lobbyists about this sick form of “recreation” being “heritage,” “conservation,” and “fair chase” it is none of those things. If these people carried out in a city to domestic animals what they are allowed to do to wild animals if would instantly be condemned as dog fighting, they would brought up on charges, and made pariahs in the media. Because this is happening in our woods to wild animals and they hide under the banner of “heritage” and being “sportsmen,” this is protected under law and lauded as “heritage” and “conservation” by disingenuous politicians and the special interests that own them. What exactly is the difference between a dog fighting ring in an urban area and the legal animal fighting that is allowed in our forests and rural areas? On top of that if a wolf allegedly kills one of these hounds the hounder gets paid $2500 for each dead hound by the state. What is wrong with this picture?

What we have here is a sadistic free for all for legal animal fighters from across the nation and a supplemental feeding free for all to artificially inflate the bear population and condition them to human food. No permit is required and the “regulations” that are posted apparently aren’t really “regulations” at all according to the DNR warden that we spoke with today. Here are a few questions to ponder:

What the hell is going on in this state and why aren’t more people aware that this is occurring?

Are the majority of state citizens really okay with these practices and the lack of regulation and enforcement?

How do we fight back and make our fellow citizens aware of what a small but violent subset of “hunters” are allowed to get away with?

Do so-called “ethical” hunters support or condone this behavior?

Why do the hounders and their paid lobbyists have so much sway and power in this state?

Why are clearly written rules and regulations NOT enforced or claimed by those tasked with enforcing them to not be correct?

These are just some questions that need to be answered in this state about why these sick practices are protected and allowed to continue. The more that we learn the more horrifying that it becomes. Is this what we really are all about Wisconsin? A recent letter to the editor of the Wisconsin State Journal by Bill Stokes of Mazomaine summed this up best:

Wisconsin citizens need to put down their brats and beer long enough to do away with this outrage. Call, write, march, yell and scream. Show that Wisconsin decency is above manipulation by a small group of insensitive, special-interest hounders.

We could not have said it better ourselves.